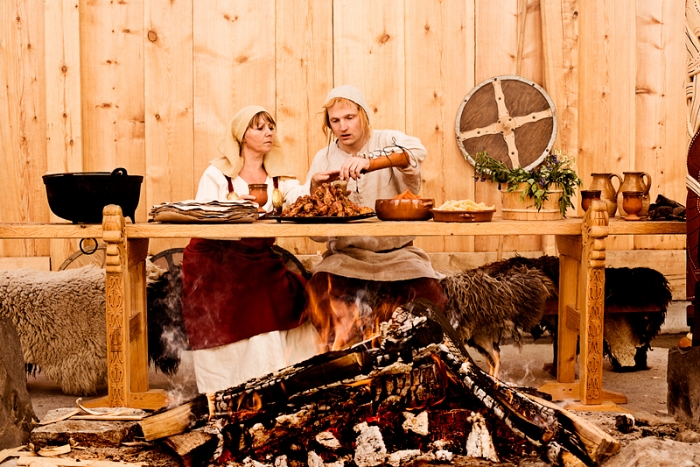 Stiklestad has a central role in Norway’s history as the place where King Olav II was killed in the Battle of Stiklestad in 1030 as part of the Christianization of Norway. This history is conveyed at Stiklestad every day through exhibitions and events.

At the Medieval farm Stiklastadir, you can step back 1000 years in time with indoor and outdoor activities together with our talented guides. Activities at Stiklestad include:

Join the maid Dorthea on a fun-filled walk from farm to farm set a century ago! There are daily walking tours all summer.

It’s full of life during the annual St. Olav Festival at Stiklestad with the Drama of St. Olav (in Norwegian language only), concerts, theatrical performances, lectures, guided tours, excursions and activities for the whole family.  You can also visit the Medieval Market where you can experience medieval music, entertainment and theatre. Craftsmen from around the country fitted out in appropriate period dress demonstrate their skills. There are daily activities for young and old alike.

The Battle of Stiklestad

The Battle of Stiklestad in 1030 is regarded as the event that has most shaped Norway. At Stiklestad the country’s most defining historic event is conveyed and experienced every day.

The Battle of Stiklestad in 1030 is the most famous battle in Norway’s history. This is where the Christian Viking king Olav Haraldsson fell in the fight against local chieftains and was later declared Saint Olav. The Battle of Stiklestad is considered as the most important event in connection with the consolidation of the kingdoms and Christianity’s definitive breakthrough in Norway.

About the Stiklestad National Culture Centre

The Stiklestad National Cultural Centre has a special responsibility for the dissemination of knowledge about Olav Haraldson, the Battle of Stiklestad in 1030 and societal development that may be linked to Stiklestad and St. Olav.

Stiklestad also features a cultural centre with exhibitions, a museum shop, restaurant /café and meeting/conference facilities, which is open year-round. Stiklestad Hotel is situated in the same building. In the local area you can stroll and visit Stiklestad Church, which dates from 1180, the amphitheatre, the Catholic chapel and open-air museum with 30 historic buildings from 17th to 19th centuries.