There are South Samis, North Samis and Lule Samis. The Southern Sami live spread over an area that extends approximately from the Arctic Circle in the north to Hedmark county in the south of Norway. In Sweden, most Southern Sami live in Jämtland and Härjedalen.

The Sami have a rich culture and history with a focus on oral communication. South Sami is 1 of 3 Sami languages in Norway and according to UNESCO the language is threatened with extinction.

The South Sami language is under severe pressure, with only a few hundred users. The South Sami live scattered, with large distances. Consequently, it is a demanding task to revitalise and preserve the language.  Like other indegenous languages, South Sami is strogly linked to nature including numerous words and concepts related ot reindeer husbandry.

In southern Sami areas, Sami handicraft (duetjie) is a central cultural-bearing and identity-creating element. The duetjie training traditionally happened in the family, but modern social development has meant that this is no longer a matter of course.

The Sami folk costume; Gapta and the languages differ from region to region, yet recognisable. The South Sami Gapta is eye-catching in red, green and blue. 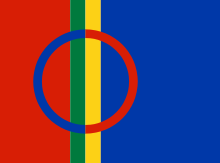 The Sami peoples national day is the 6. February and the Samis call this day sámi álbmotbeaivi. The day marks the first Sami congress held in Trondheim on 6. February 1917. Around hundred south – and north Sami from Norway and Sweden met that day to discuss issues that were important to the Sami people, such as the school issue (what Sami children should learn at school) and the reindeer grazing question (the open pasture and compensation for restricted pastures). The day was celebrated for the first time in 1993 and from 2004 the day became the official flag day.

A reindeer grazing district runs over several municipalities and the municipalities in Innherred are included in 5 different reindeer grazing districts. These reindeer grazing districts are year-round, which means the seasonal grazing distircsa are within the same geographical area.
The timing of the move to winter pastures varies from year to year based on weather and snow conditions, but is usually completed during January. Spring migration occurs in the last half of April, before the calving season begins. During the calving period and during relocation, it is especially important to pay attention to the reindeer if you are out hiking. Avoid seeking out the reindeer during these times. Reindeer husbandry of today is more modernised industry with a larger degree of mechanisation and use of technological innovations.