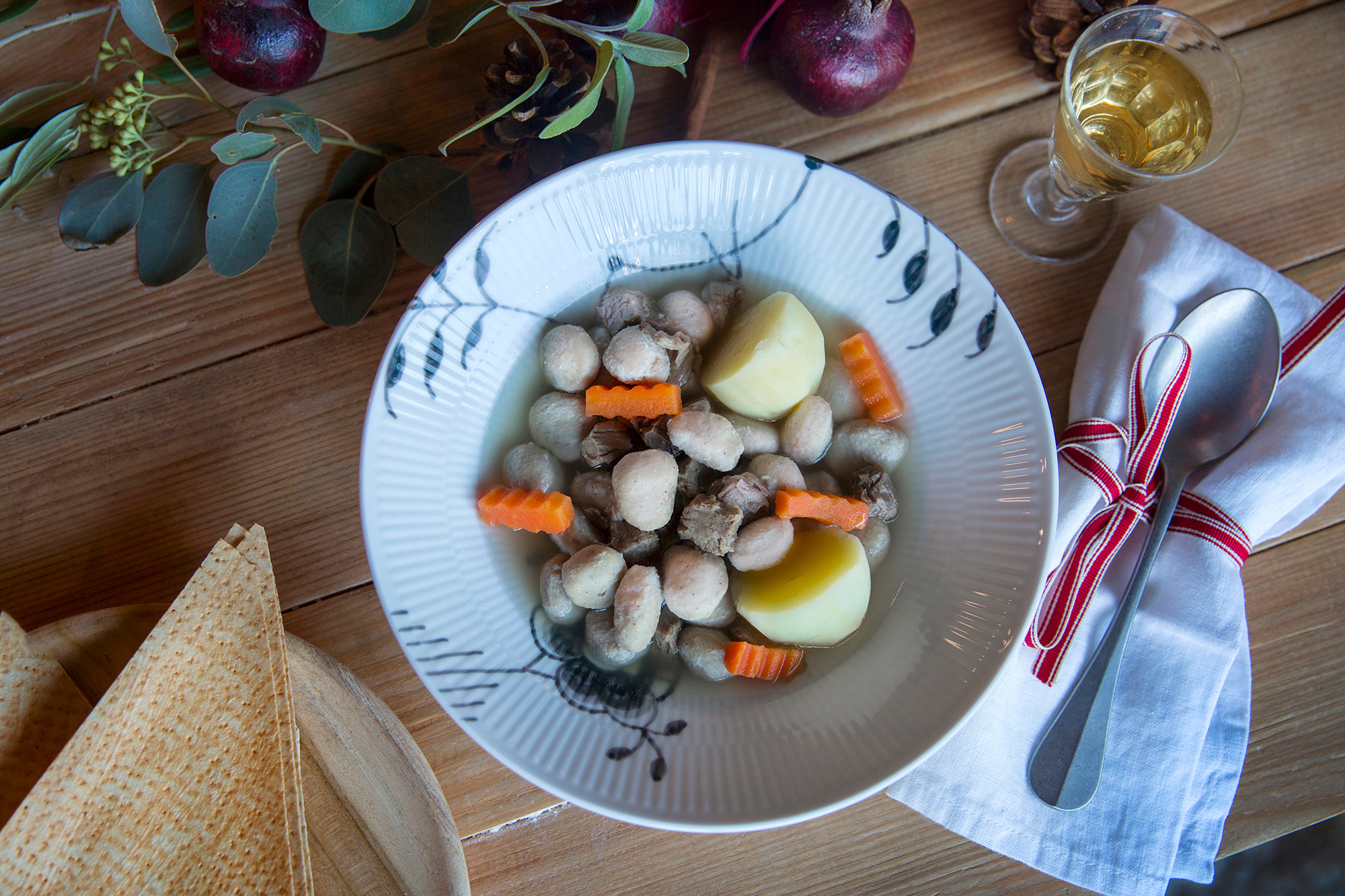 Sodd is festive food from Trøndelag and is made from the same recipe as generations ago – it is invariable. At Innherred, the craftmanship of this beloved food dish is safeguarded by Inderøy Slakteri (butchery shop).

The Inderøy sodd was awarded the 2010 Complete Meal (komplette måltid) during the Norwegian Championships for meat products. In 2012, Inderøy Sodd receved approval as a protected designation undr the name of Festsodd from Trøndelag.

The term sodd (broth) is used as early as in the Saga about Håkon the good in sagas about Norwegain kings (Snorre Sturlason, circa 1220-1230), where it is mentioned that the farmers forced the king to eat sodd of horse meat during a blot guild at Lade. The term sodd probably comes from the Old Norse word “sjoda” which means to boil.e.

Sodd is referred to a party food at banquets such as weddings and funerals in old rural books. Sodd was often the main course. In the Inderøy book (Vol I, part II, Andreas Ystad and Ingvald Sakshaug) it is written about the use of Sodd in weddings: “The came the “fergångskånå” with the Sodd in large bowls – with the meat and potatoes in the broth. The first bowl was served to the bride. Then more bowls were served down the table, and many ate from the same bowl, usually 4 people, 2 on each side of the table. At such feasts, Sodd was always served the the equally traditional fr\lat bread “Skjenning”.

THE VILLAGE COOKS in INNHERRED

From ancient times up intil the 1970s, it was the village cooks who kept the knowledge and the Sodd making alive. Every cook had its own recipe.  The village cooc was summoned when there were celebrations and they were oten on site 1-2 days in advance. They were involved in the carving of the carcasses, to secure the best meat for the sodd. On the actual day of the party, the Sodd was heated – meat balls and broth in one large casserole and meat cubes and broth in another.

Inderøysodd is made from beef and mutton, which are cooked, cleaned and cut into cubes. The fine broth they get from the boiling of the meat is then salted and spiced with their “secret” spice mix. Additionally, they add their distinctive meatballs, which are made from prime beef and mutton. The meatballs are infused with milk and cream to accentuate the good and round flavor.
Sodd is served with potatoes, carrots and “Skjenning” -a special thin crispy party flatbread which is brushed with milk – and sugar brine. The Skjenning is produced by the Røra Bakery in Inderøy.
Potatoes and carrots must be cooked seperately and added to the soup bowl after the the sodd has been served. Drinks served with Sodd is usually inger ale or i.e Sodd Beer from Inderøy Farm Brewery (micro brewery).

Sodd as every day food

Sodd has these days become a more everyday food, or at least weekend food. According to the Norwegian Center for Rural Research is not entirely unproblematic. This is because it erases a desired difference between casual and formal.  But the Trønder people handle this well; i.e treating themselves to Sodd the odd weekend, but “dressing up” the party Sodd by serving it with “Skjenning”, buying it directly from Inderøy Slakteri etc. By the same token, Sodd has the advantage of being easy and suitable to serving a larger number of guests. This is probably an important reason for why it has survived as a party dish. In addition to being unbelievably tasty, of course!