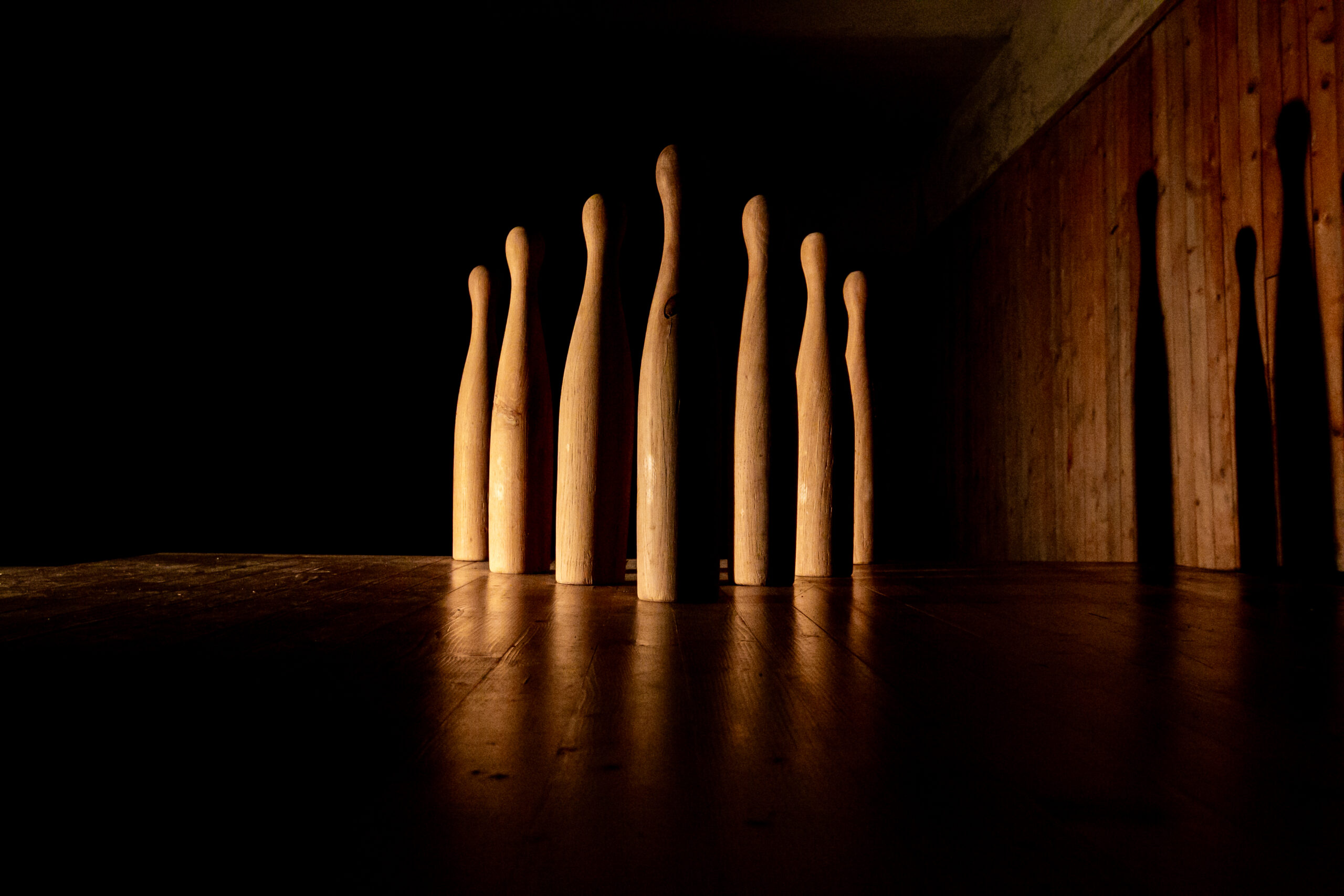 Faces of Power in the Commander's residence. Photo:Anton Wagner

Farstad Center is known to many as a former prisoner-of-war camp during World War II. Today it is a national centre commemorating the history and human rights of World War II prisoners of war. But it’s also where you’ll find several works of art that contribute to reflection and conversation about the history of the place.

A display of art in the commander’s residence.

The commander’s residence at Falstad was designed and constructed by prisoners on orders from the German management of the SS Strafgefangenenlager Falstad between 1943 and 1944. It served as the residence of commander Werner Jeck and his successors Georg Bauer and Karl Denk. From 1945 to 1949, the director of the national traitor camp Innherad prison lived in the residence. As a result of the renovations, the commander’s residence served as the Falstad Center’s upgraded learning arena in the autumn of 2020. For alternate activities, the main floor has been designated as a “democratic workshop”. A display entitled “The Faces of Power” is located in the basement.

The “Faces of Power” exhibition is located in the Commander’s residence’s basement. The German Commander’s officers’ wardroom, fireplace lounge, bar, enclosed firing range, and shelter are now all located here. The exhibition is constantly being improved for use in classroom and workshop activities. It facilitates the investigation of stories about supremacy, disempowerment, and counter-power in the SS barracks at Falstad. Using history as a starting point encourages reflection and discussion about the connections between power, liberty, choice, and responsibility. The Falstad Center closely worked with architects Carle Lange and Oliver T. Edwards to create the exhibition (Doyo Group AS).

From July 2nd, 2022, the German photographer Jakob Ganslmeier and the Norwegian writer Simon Stranger will exhibit their collaborative work “Führerzimmer” in the commander’s quarters at Falstad for the first time. The work is a multifaceted and audiovisual installation within which the artist duo inscribes and explores the viewpoint of the war’s perpetrators. The work was created as part of the “Houses of Darkness” European cultural cooperation project.

Ears of the field

The acoustic production of the “Ears of the Field” by the artist Siri Austeen is performed in the new glass extension to the commandant’s residence. The work was originally created as part of the Falstad Art 2009 project, at the direction of “Kunst i offentlige rom” (KORO).

In the Borggården at Falstad Center, there is a lovely tree sculpture called Re-Remembering. It was created by artist Tore Reisch and consists of six pairs of feet carved from ore pine trunks. The feet form a circle and join in a solid knot at the top. A cube with spiral shapes cut out in trees sits inside the circle. The spiral shapes are associated with the DNA molecule, which determines the properties and inheritance of the body’s cells. The work focuses on the question of whether traumatic events and personal experiences from captivity and imprisonment can be passed down to future generations: Is it possible for tragic war experiences to be passed down through the genes to children or grandchildren?

Four memorials can be found in Falstad Forest, not far from the Falstad Centre.

– The “Arkebusering” carving was created by sculptor Odd Hilt, who was a prisoner at Falstad in 1942.

– Gunnar Jansson, a sculptor, designed a memorial in 1963 that included 27 stone pyramids and a memorial stone with a name and a map. Each pyramid represents one or more burial grounds.

– In 1998, Nils Aas’ sculpture was displayed on the opposite side of the path in Falstad Forest.

– To commemorate the opening of the Falstad Centre in 2006, architect Atle Aas erected a memorial stone with the names of Yugoslav victims.

Nils Aas also created a new bronze sculpture for the Falstad Centre. The “Falstadfangenes takkebauta” stands at the centre’s entrance.

Former Falstad prisoners erected it in 1999 as a thank-you to the people of Ekne. The stone bears the following inscription:

To all of you who, at your own risk, smuggled letters and greetings into the camp and opened your homes to all those who wanted to visit us. We will be eternally grateful. Thank you .”